Small businesses are growing increasingly worried about the financial impact of high inflation, with an overwhelming majority of owners saying the worst is yet to come.  In fact, The vast majority (90%) of small businesses say they are concerned about the impact of inflation on their business, with 54% saying they are VERY concerned, up from just 31% in the first quarter.  The fact is,  that inflation that the Biden administration assured us was only “transitory”  is now exposing itself and is really hitting small business hard.  It is exposing a crushing reality and is now negatively impacting business owner confidence, the ability to hire, or to invest to grow.

In spite of dealing with the current “runaway inflation”, small businesses remain optimistic.  Just 3.2% of small businesses have recently said that they planned to close in the near future, at least according to the newest data from the U.S. Census Bureau Small Business Pulse Survey.  At the same time, 4 out of 5 small business owners reported they’re seeing moderate or large increases in the price they pay for goods or services and they’re are now increasingly seeking new suppliers. Inflation rocketing to new levels and it’s now the chief concern of small business entrepreneurs.

FedEx:  The Canary in the Coal Mine

FedEx Corp. announced late Thursday a 6.9% general rate increase (GRI) for 2023, the largest year-over-year increase in its history.  The increase will apply to all FedEx services except for its less-than-truckload service, FedEx Freight. Increases there will range between 6.9% and 7.9%, depending on the customer’s transportation rate scale, the company said.  Companies like FedEx are bellwethers when gauging the health of the economy because such costs are passed along and affect virtually all types of business enterprises.  Shares of FedEx (FDX) on the exchanges plunged 21% Friday,  the biggest one-day drop in its history and the company warned that a slowing economy will cause it to fall $500 million short of its revenue target.
The FedEx shock doesn’t appear as a one-off event.  Amazon, the largest online retailer, has also confirmed the same shipping slowdown facing Prime Air, a large fleet of cargo planes transporting Amazon packages, Bloomberg reported. Everyone now knows that consumers are hanging on by a thread.  They’re maxing out their credit cards and draining personal savings, or what is left.  Even in some cases many are getting multiple jobs to survive the high inflation affecting basics such as food and housing.  Consumers have already shifted away from buying discretionary items to staples as companies now are holding uncomfortably high inventories of products (such as televisions and computers) as demand vanishes.

Currently, over two-thirds of small business owners (71%) say their companies have already felt a significant impact as a result of the higher prices they’re paying in many areas.  To cope with higher prices, about 7 in 10 businesses said they were raising costs for consumers. On top of that, nearly half  (46%) have reported applying for loans in order to cover higher operating costs while about 35% have been forced to cut payroll.  What is clear, is this economy is not going to correct any time soon and if history teaches any lessons about such problematic economies, banks will characteristically stop lending and this is one of those times that factoring can come to the rescue.

One of the first signs of BIG problems for small business is when there is serious difficulty in meeting payroll.  Just like themselves, all of their customers are affected and will one of their ways to temporally conserve needed cash is to pay invoices late.  Thirty day normal payments are stretched to forty-five or longer and it can get worse…much worse.  Business owners need to accommodate their customers and give them some breathing room so they can keep them.  And the way to do that, is factoring.

Factoring allows the clients of a business can to continue to enjoy liberal payment terms for goods or services received so they can weather the storm.  In the meantime, the business providing the services or goods can receive weekly cash advances on those invoices so that it, in turn, make its payroll and meet current expenses.  Factoring is one of the simplest forms of commercial finance.  It is modest in expense and can be put in place in just a few days, rather than weeks.  While many brokers and consultants have focused on easy to receive SBA financing during the COVID Pandemic, those days are over.  To meet the needs of B2B small business today, it may well require accounts receivable factoring.

10 Benefits of Factoring You Should Know

Worldwide, factoring is by far the most popular and utilized financial solution used to address those cash flow problems related [...] 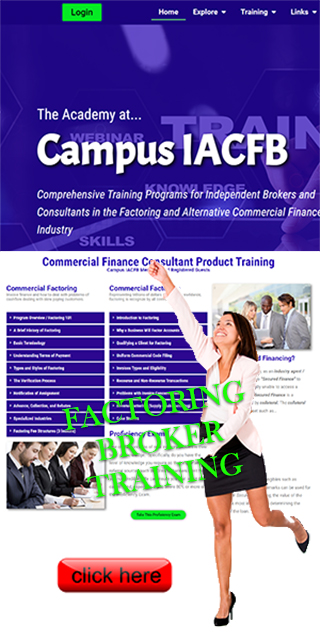 More and more home-based entrepreneurs and mobile creatives are discovering factoring and the under-the-radar opportunity known as “factoring broker” which is commercial finance consulting if practiced on a career / professional level.  But though the […]

Commercial finance consulting is an exceptional business by any measure and offers a host of income options that make this career one that virtually anyone can participate in.  One of the problems with this business […]

All successful career Factoring Brokers and Consultants know the importance of building expansive referral networks since the factoring industry polls members and year after year, those polls show that roughly fifty percent (50%) of all […]

Factoring is a method of small business finance that his been around a long time, several hundred year in fact in the United States.  In fact, if you find yourself in Savannah any time soon, […]